The next two major events in NA are expanded regionals – Richmond, VA on Nov 2-3 and Portland, OR on Nov 9-10. I started testing for Richmond over a week ago and I have some thoughts and testing results to share with you.

I will only be speaking about decks and ideas that I have tried myself in some form of testing. Mewtwo & Mew Tag Team feels about as absurd as you’d imagine. I like it best in the Mega Gardy variant that includes 4 Giratina LOT to spread bench damage since Mega Gardy has the despair ray attack that can clear your bench anyway. The recurring Giratinas that spread with Distortion Doors while you deal moderate damage to the active for just one energy with Dimension Valley feels very efficient, fast, and overwhelming. 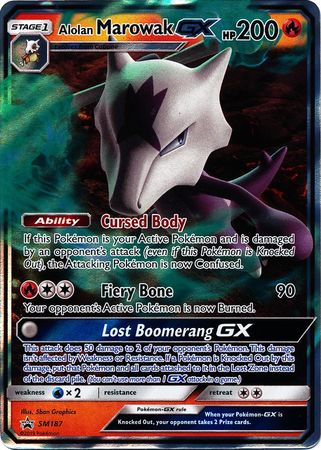 This deck has also been including Alolan Marowak-GX which has a free GX attack that does 50 damage to two Pokémon and sends them to the lost zone if knocked out. This is very good vs two of Mewtwos would-be bad matchups which are Sableye Garbodor and Zoro Control since they need to evolve their Pokémon from low HP basics. Things don’t always work out perfectly of course, but Mewtwo Mew/M Gardy is a very powerful and adaptable archetype that I expect to see more talk about as we get closer to the events. Sableye Garbodor has the potential to beat anything due to its constant recycling of degenerate cards like Trick Shovel, Chip-Chip Ice Axe, Enhanced Hammer, Faba, Reset Stamp, Mars, etc. Zoro Control is a very strong archetype for the same reason, but while Zoroark Control has the added draw power of Zoroark, Sablegarb has the ability lock that Garb offers. I think Zoro Toad has potential, but might need to consistently establish an Alolan Muk SUM to be strong enough in the upcoming meta due to Mewtwo & Mew appearing in its own archetypes and in Archie’s decks. Continuing on with the tune of control decks, Shock Lock is an archetype that you can’t safely plan to play this far out from the event, but looking at lists and popular decks when it gets closer can paint a better picture as to whether the meta is setting up nicely for this constrictive and focused Control archetype. As for non control decks and non Mewtwo decks, I think that Turbo Dark and Rayquaza-GX offer aggression, speed, consistency, and board presence that has the potential to run over just about anything in their paths short of a wall Pokémon that can’t be hit by basics or GX/EXs.

Sableye has the unique and efficient attack Junk Hunt which puts two items from your discard pile into your hand. Objectively, it is a good attack that can get back resources and it was used in Standard format occasionally to get back resources in dark type decks. But years later, there are an incredible amount of item cards available in the expanded format and the Sableye Garbodor deck is basically made up of as many degenerate and overpowered cards as possible. Junk hunt allows you to continuously reuse just about anything you want with the help of dowsing machine and vs seeker to get back non-items. Sableye Garbodor is a control deck that hopes to lock the opponent by keeping a Pokemon that cannot attack in the active, running them out of useful resources, and eventually decking them out. With new strong cards like Mewtwo & Mew Tag Team GX and Lt. Surge coming to expanded, it is easy to forget about older cards like Seismitoad-EX. Seismitoad-EX only has 180 HP and does a mere 30 damage with its main attack – can that really be enough in this format with Tag Teams like Pikarom and Mewtwo Mew? I would argue to say yes, Seismitoad-EX can thrive in this expanded format and I expect Zoro Toad to end up being a strong archetype. Item lock is a very strong strategy that many decks may not be ready for.  Whether Zoro Toad ends up having success will likely rely on what other control decks end up being strong and liked by top players. Zoroninja is a very strong attacker that has reshaped and revitalized the Turbo Dark archetype in expanded. Zoroninja’s attack costs two energy and does 30+ 30 more for each dark energy on your board. The archetype can set up early and establish a board of energy outputting a lot of damage, which can be difficult for any type of deck to deal with. The weakest part about Zoroninja is likely that it is a tag team weak to fighting type that can be taken advantage of by single prize attackers like Buzzwole FLI and Hitmonchan TEU. It has a lot of strengths though, including high HP, efficient attack cost, high damage output, and plenty of dark type support like Dark Patch, Darkrai-EX DEX, and Darkrai-GX. Garbodor’s Trashalanche attack has been very good in many metagames both Standard and Expanded. Trashalanche often gains strength when there are new cards and archetypes to take attention off of preventive deck building since players not keep in mind the danger of running high numbers of items in their decks. Ability lock is always strong, especially when it has been so long since the last major expanded tournament and players have gotten very comfortable with standard. Stealthy Hood is a new card for Expanded that actually prevents Garbotoxin from shutting off an ability, but stealthy hood cannot interact with draw support Pokemon like Shaymin-EX, Dedenne-GX, and Tapu Lele-GX since they need to use their ability when being played down.

Mew3 is an insane card in standard… so let’s throw it into expanded and see what crazy combinations happen. Mew3 can copy Exs and Gxs from your bench or discard which means that even Mega Pokemon-EX can be copied by Mew3. A popular card that will be used with Mew3 is Mega Gardevoir-EX (Despair Ray) since you can spam Giratina LOT Distortion Doors and then copy Despair Ray for only 1 energy with Dimension Valley to clear your bench to do it all over again next turn. This is just one obnoxious interaction between Mewtwo & Mew Tag Team GX and cards from the past that were never meant to be used in this way. Archie’s Ace in the Hole enables Blastoise which enables an entire archetype to exist. Blastoise seems like a strong stage 2 Pokémon, but Archies allows this stage 2 Pokémon to go straight to the bench and grant the player with unlimited energy attachments. This was a strong enough deck last season when it won a regional championship and did well at several others, but it has gotten much stronger with the addition of Mewtwo & Mew Tag Team, Espeon & Deoxys Tag Team, Stealthy Hood, Dimension Valley, and the inclusion of Kingdra-GX becoming the norm. Stealthy Hood on Blastoise stops Wobbuffet and Garbotoxin from shutting off the ability, and the same goes for putting a stealthy hood on your mewtwo & mew to preserve their ability. Reset Stamp is a very strong card in both formats, but because of the existence of N in expanded I do not expect Reset Stamp to be as universally played in Expanded as it is in Standard. It is however, insanely powerful in control decks like Sablegarb and Zoro Control. Control decks play with the strategy of falling behind in prizes to use strong cards like Counter Catcher, N, and now Lt. Surge’s Strategy and Reset Stamp. Early game, cards like red card and Marshadow’s Let Loose Ability will usually have more effect than a reset stamp, but in control decks it is all about your late game. As I’ve already alluded to, Stealthy Hood is really strong in expanded to prevent some very strong ability’s effects like: Vileplume BUS, Garbodor Garbotoxin, Raichu Evoshock, and Alolan Muk SUM. I expect to see it in Mew3 decks because it relies on the ability, and also in any decks that are scared of Vileplume BUS or shock lock.

I will be working on creating lists to share next week, but it is very hard as a writer to prepare lists this far in advance that will still be relevant the day of the tournament – especially when this meta is so untouched and open to be explored. Thanks for reading!